Posted on April 4, 2012 by Aromatherapy Contessa 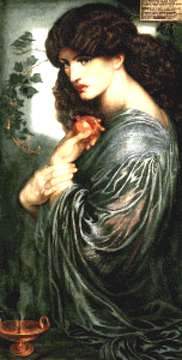 The beautiful daughter of Demeter and Zeus, Persephone is the focus of the legend resulting in the division of the seasons, giving us the sweetness of Spring and the bitterness of Winter.

Hades (The King of the Underworld and brother of Demeter) fell in love with Persephone.  Hades did not woo the beautiful Persephone, instead he abducted her and took her to his underground kingdom.  After much protest, Persephone came to love the cold-blooded king of the underworld but her mother, Demeter, was consumed with rage and sorrow.  She demonstrated her anger by punishing the Earth’s inhabitants, gentle and fierce with bitter cold and blustering winds.  Unless Persephone was returned to her mother’s side, the Earth would perish.

Herakles came to the rescue.  He entered the underground kingdom of Hades and negotiated a compromise between the (usually cold and selfish) Hades and the (usually loving and caring) Demeter.  All agreed that Persephone would to spend part of the year with her husband, Hades, and part of the year with her mother, Demeter. When Persephone is with Hades the Earth is wracked by the sorrow of her mother.  But, when Persephone returns from the underworld to walk the earth again, Demeter pours forth the blessings of Spring to welcome her beloved daughter home.

She still symbolizes the sprouting seeds of springtime.  The mint and pomegranate are sacred to her.

I love creating aromatic blends with essential oils whether for my Arlys Naturals product lines, for fun, or for customer special orders. I'm just drawn into the veil of mystery that nature has provided through these living plants, not just in their aromatic properties, but also their natural healing properties.
View all posts by Aromatherapy Contessa →
This entry was posted in General. Bookmark the permalink.